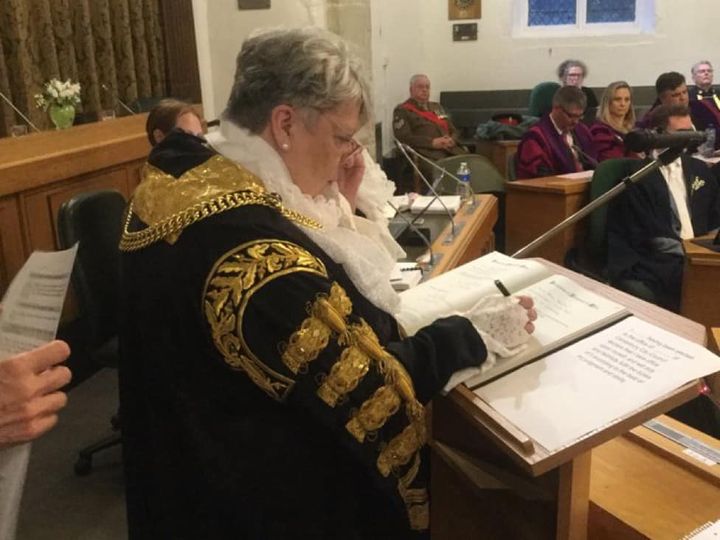 In a very unusual annual meeting on Canterbury City Council on 18 May, opposition councillors inflicted a humiliating defeat on Council Leader Ben Fitter-Harding.

As the ruling Conservative group enters what we fervently hope will be its last year in power, the leader had hoped to reinstall Cllr Pat Todd for his fifth, and second consecutive term. By tradition this role usually passes to the Sheriff, a role occupied for the last year by Cllr Anne Dekker.

As with several previous issues, we heard many of the Conservative group were unhappy with this snub. However, the last time a Conservative councillor openly defied the leadership, former Lord Mayor Terry Westgate found himself unceremoniously drummed out of the party.

Given this situation, Labour, Lib Dem and Green Councillors combined to request a secret ballot to allow all councillors a free vote on who should become their Lord Mayor.

In an often heated meeting various procedural tricks were tried to thwart a potential rebellion, however the combined efforts of Labour Leader Dave Wilson and Lib Dem Leader Michael Dixey ensured councillors did indeed get the chance to vote freely for a choice of two candidates.

The option for a secret ballot was retained as part of the hastily prepared new constitution, which did away with the committee system. It’s a measure that has no place in the running of a truly open council, but on this occasion offered a unique opportunity to briefly disrupt the bloc vote which has seen disastrous measure upon disastrous measure bundled through Council.

Anne Dekker was duly elected by 23 votes to 12, With the two candidates abstaining and two spoilt ballot papers, in defiance of the leader who petulantly displayed his ballot paper to all before casting his vote.

The new Sheriff, Louise Harvey-Quirke was then elected unanimously, in an open vote. Interestingly Ben Fitter-Harding was then confirmed as leader for another year by a margin of 23 votes to 16, with councillors reverting to party lines. The Leader voted for himself, where one would usually expect him to abstain, perhaps he wasn’t sure how this vote would go either.

It seems Mr. Fitter-Harding’s legacy will be to have achieved something very few politicians ever manage: uniting Conservative, Labour, Lib Dem and Green councillors. Albeit in opposition to him.

There is a growing sense of unease at the direction of the current administration, one it appears that crosses all party divides.

With no favours to give or the spectre of punishment, it appears the Conservative leader commands the loyalty of only 12 of his councillors, which at best makes him the de-facto leader of the opposition.